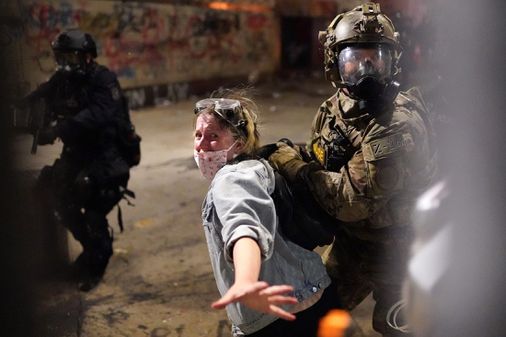 But the danger, according to constitutional scholars, would extend beyond any physical clash between residents and federal officers.

“If it goes unchecked, then it’s an invitation to this, or a future administration, to deploy federal officers beyond the limits of their constitutional authority,” said Noah Feldman, a constitutional law professor at Harvard Law School, who testified before Congress last year about Trump’s impeachment. “And in the end, that makes us all less free, less safe, and less protected.”

Trump’s deployment of a secret paramilitary force in Portland, purportedly to protect against vandalism of a federal complex, has triggered growing clashes in a city with a reputation for activism. Portland’s mayor was among those tear gassed earlier this week in a scene he described as “urban warfare.”

Trump said this week that he intends to send federal agents to Chicago and Albuquerque, N.M. ― part of a “law and order” campaign that he says was in response, not to street protests, but to violent crime. It expands upon a similar effort in Kansas City. There is no indication he wishes to send agents to Boston.

To the surprise of Washington Governor Jay Inslee, federal troops were deployed to his state after the Trump administration assured him there would be no “surge of additional personnel to Seattle,” Inslee said in a series of tweets late Thursday.

He said he feared the federal presence would “aggravate the situation” and urged them to stand down unless summoned.

“It is critical that the administration only provide what is needed by state and local officials, and do not engage unless asked,” Inslee said.

The federal forces are necessary, Trump says, in cities and states where liberal mayors and governors have lost control of civil unrest and violent crime.

Not only is the deployment of a secret federal force unconstitutional — federal forces are not allowed to move in and take over as street crime fighters — but it also turns the whole notion of federalism upside down, Feldman said. It pits states against the federal government, upsetting and undermining the delicate balance between the two.

“What we should be watching for is if this actually happens at any scale,” he said.

To be sure, federal agents have been used to quell unrest in American cities in the past. But that has generally come at the direct request of local officials who were unable to keep the peace — or in cases when local authorities were defying federal rule, such as in the case of desegregating schools.

The scene in Portland, scholars say, is dramatically different.

They point to assaults and aggression against protesters by camouflaged and un-badged federal forces and to what the critics say are illegal detentions of people swept off the streets.

“Arbitrarily grabbing people because of their dress, or because of the way that they left the area, or that they ran away from the police … seems to be shaky legal grounds at best on detaining somebody,” Friedman said.

“We’ve never had a domestic security service in the United States and there’s a reason for that,” Friedman said. “Because of the dangers to civil liberties.”

Boston has not been named by Trump in his statements this week. The city is not plagued by violent crime, and the street protests here sparked by the killing of George Floyd in Minneapolis have been largely peaceful.

But Democratic city and state officials came out in force this week to vow that such “outrageous behavior” would not happen here.

“What we’re seeing in Portland should deeply upset every American,” Massachusetts Attorney General Maura Healey said in a statement. “Watching masked, rogue federal agents terrify residents and round them up in unmarked vans without a warning or a warrant is scary, dangerous, and illegal.”

Boston Mayor Martin J. Walsh voiced similar concern. “That behavior and that type of so-called help is not welcome here in the city of Boston,” he said outside City Hall.

Boston Police Commissioner William Gross was not available for comment and deferred to Walsh’s statement, a police spokesman said Friday.

Suffolk District Attorney Rachael Rollins on Friday vowed to take legal action, criminal or civil, to protect against a “president and attorney general who are terrorizing the very people they should be protecting.”

“No individual, even a member of law enforcement, is above the law,” Rollins said in a statement. “And no federal agency is, either.”

Republican Governor Charlie Baker was more tempered in tone, yet said from his experience, the best practice is not to lend a hand unless asked. “We don’t go where we’re not invited,” he said.

Among the practical measures at their disposal: Seeking restraining orders, suing in court, appealing to Congress, and decrying what they’re witnessing and experiencing.

In Oregon, pushback by state and local authorities has been vehement. The state’s attorney general has turned to the courts for intervention, and members of Congress have asked inspectors general from the Justice Department and Department of Homeland Security for help. And the House of Representatives is working on a bill that would require federal agents, while on duty, to display their names, identification number, and agency. It would also mandate regular audits by an inspector general to report to Congress.

Healey said she stands in solidarity with Oregon Attorney General Ellen Rosenblum, who is seeking a restraining order against the federal government. Rosenblum is also suing in federal court on grounds that it is illegal for undercover federal agents to stop and forcibly grab protesters off the street, put them into unmarked vehicles, and detain them without providing a reason.

Healey said she also will join a separate federal lawsuit in support of Oregon.

“These actions are meant to suppress freedom of speech and intimidate anyone who opposes Donald Trump’s agenda,” she said. “We won’t allow that to happen here in Massachusetts.”

Walsh joined other mayors in sending a letter to the departments of justice and homeland security, urging that they “withdraw these forces and end this strategy immediately.” A second letter, he said, went to Congress, requesting public hearings and assurance that no public money would be spent on these deployments.

The Department of Justice announced Thursday that an inspector general will investigate the federal response.

Legal scholars see political cynicism in Trump’s actions — diverting the public’s attention from the pandemic and collapsed economy. But, they note, it could also backfire.

“He’s taking a huge gamble,” Feldman said. “Many of Trump’s supporters believe in states’ rights, or they say they do.”